You may realise that our area has always been primarily agricultural. The industrial revolution did however reach the farming community.  Early ploughs gave way to better machinery and then mechanised tractors, today’s are huge with many different fittings to help on the farm and replacing labour. Visit the Dales Countryside Museum at Hawes dedicated to the agricultural past. Nearby is the Hawes Ropemakers, an original craft still in use today which you can visit free of charge and perhaps buy a rope.

Cheese and butter were also made by farmers for additional income with the butter market the first of the day at 6 o’clock on Monday morning at The Cloisters in Kirkby Stephen when the bell was rung. The Wensleydale Creamery at Hawes was set up by Wensleydale farmers to make cheese now made famous by Wallace and Gromit.

The area was well known for knitted stockings made during the American War of Independence and the Napoleonic Wars for soldiers. The wool was distributed on market day and the completed items returned the next week for payment and onward transport by packhorse to London.  Men, women and children all knitted one handed with a knitting stick whilst carrying out their chores.  Knitting helped the farmers to add to their meagre income and prevent starvation.  Even cattle drovers knitted on horseback passing through.  The end of these wars saw a decline in demand and mechanisation eventually took over.  We have had a succession of small stocking factories in Kirkby Stephen into the 20th century.

Children were put to work collecting the small pieces of wool that come off the sheep’s fleeces and collected together these were bought on Market Day by the Flemish weavers from Kendal that made “Kendal Green”.  This is a coarse woollen cloth similar to tweed that is dyed using the woadwaxen plant, “dyer’s greenwood”.  “Kendal Green” is the same as “Lincoln Green” worn by foresters including the legendary Robin Hood. Local sheep wool is generally very coarse, of low value, and is today used in carpets.

One traditional farming trade that has survived is drystone walling.  You cannot help but notice the miles of walling said to have been originally built by sandstone flag makers from Swaledale in the 19th century.  The higher walls of the deer parks that can be seen in Nateby and Ravenstonedale date from the 16th century.  We have a few traditional hedges that are still layered. 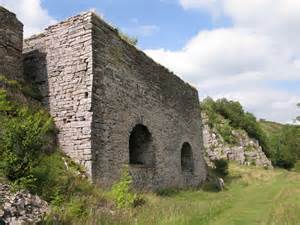 Our countryside is littered with Lime Kilns.  These look like tunnels in the hillside and were used for burning limestone rock to make a fertilizer for the fields or cement for building. There is a small lime kiln on the southern edge of Kirkby Stephen and some huge kilns at Smardale Gill that were used to produce lime cement for building the viaducts.

Anywhere there was a need for power, a watermill was built along a river or beck (stream).  Kirkby Stephen had corn (mainly wheat) mills and a fulling mill and latterly a mill for woodworking. Brough, Hartley and many villages had a succession of water mills through the centuries and some buildings have been converted into homes.  With a little insight you will see the remains of weirs, ponds and mill races that fed the mills of the past.  Just outside Hawes is Gayle Mill, a Victorian water mill using water power for woodworking machines.  On the outskirts of Sedbergh, Farfield Mill still powers looms and houses an arts and crafts centre.

Kirkby Stephen also had a cotton mill but this was short lived no doubt because of the high cost of transportation to and from Kirkby Stephen. The higher value cotton mix materials also eventually failed but the Workhouse inhabitants were useful labour for a time.

Lead has been mined in our area since Roman times.  This soft material is easily smelted and worked locally. Galena, Barytes and copper pyrites were mined on Stainmore over a substantial period.  Associated, smelting, hushing, mine shafts and tunnels litter the fells. Coat Pits were at Tan Hill which used coal roads and led to the wealth of villages like Kaber.

There is also a limited amount of silver in the area and this is the legend of Silver Street, Kirkby Stephen where it is said that local silver was crafted into products to sell.

Quarries for Brockram stone for house building were in what is now Birkbeck Gardens and Quarry Close as well as in the Deer Park at Nateby.  Limestone was quarried at Hartley with its pink tinge from the sandstone layers. Limestone is still hydrated at Hartley Quarry and this is the white smoke that can be seen over Hartley.  Helbeck Quarry above Brough was opened in 1920 and ever expanding as the limestone is blasted out of the mountainside.

Black, white and tin smiths, saddlers, candle makers, clock makers, wheelwrights and all the usual crafts were offered in Kirkby Stephen and the area for the resident population before the railways brought factory made off the shelf products.  The industrial area of Kirkby Stephen was Mellbecks and at the junction with Nateby Road were the tanning yards where the hides were cured and worked.  The area is still named Sour Pow from the tanning pits being emptied into the water course which was very smelly.  The stream that runs up High Street and along Mellbecks is now underground; you can see the arches and hear the water.

Kirkby Stephen had three printers in the 18/19th centuries. Braithwaites, Market Square and Parkinsons, Silver Street even wrote and printed the first tourist guidebooks for the area when visitors were encouraged to go for walks and visit the Stenkrith waterfalls. Some things don’t change.  Later books gave us touring routes for motor cars. There is still an old style yellow AA sign at Nateby Inn and the fingerpost at the junction of Nateby Road and High Street gives the distances to include furlongs.  Poet John Close also had a printing shop, Poet’s Hall where he printed his poetry about local life and his wife sold tea at 2s. 6d. per lb.

Brewing was an essential part of life when the water was less than pure with large houses and small ale houses brewing.  This was later replaced by larger breweries. Kirkby Stephen had three, the largest and most successful, where the water supply was more reliable, was at Frank’s Bridge along with the brewery Manager’s House.  The bridge has been renamed over the years in accordance with the brewer at the time. The town had up to seventeen inns, ale houses, hotels and variations that catered for passing trade, market day and visitors as the mode of transport changed.  There was a similar pattern in Brough particularly with the main highway to London with village pubs adding to the mix.

Tourism for pleasure has been an increasingly important ingredient in the local economy since the 18th century leading on from catering for journeys made for trade by packhorse or drovers.  They came by stage coach and then railway to be replaced by masses of coaches stopping on their way to Blackpool for holidays and the illuminations sustaining many cafes day and night.  We still see passing trade in cars with HGV’s banned to protect our town but Brough has been by-passed and lost their long history of serving travellers.  Increasingly, our visitors arrive on foot walking one of the six long distance routes.